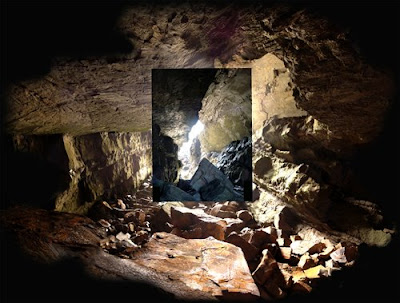 After writing about how things change I was reminded of another current image, which will be in the Ruby Expo, which has changed – through my own mistake!

Atlantic Aperture (collapsed) was shown originally at Trelawney Garden Centre with Atlantic Aperture, shown one super-imposed on the other above. Following is the text that accompanied the two images:

We are living on the frontier of climate change here in . Our coast is living proof of historical changes through different heights of sea level and the comings and goings of Ice Ages. As the speed of change increases, so does the evidence. In the three years I?ve been photographing the coast I?ve seen caves disappear as their roofs have collapsed into the sea. This image is a combination of two that are in this exhibition; the original ?Atlantic Aperture? was shot in the spring of 2006 and the other was the same place one year later. This was an eight metre high tunnel, a passage from a small sheltered bay to the roar of the , situated just west of Hartland Point and only accessible at low tide. Now, buried under a huge landslip, it?s only entrance is from the sea.

Anyway, I digress. I went to print Atlantic Aperture (collapsed) for the Ruby Expo, as they had accepted the image I had sent them as above, however, search as I might through my computer, external drives, back-up DVDs etc I could not find the image. So I resigned to making it again from scratch. Bizarrely after half a day of concerted Photoshop effort it turned out different, I believe better, than it was.

I?m not sure if there is a moral here. It ought to be ?keep your workspace clean and tidy?, ?file everything away in a methodical fashion?, ?always make a back-up of your files?. But my loss is also my gain as the new construction from the original frames is better than it had been. Perhaps the moral should be all of the above plus ?occasionally re-work your images?! 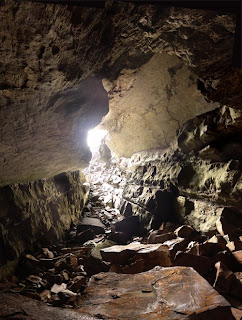 …I hope you both listened to the radio interview – I would like to follow it up with a more in depth interview about photography. This time maybe do it somewhere quieter!

Thanks for following pb, yes we enjoyed the radio interview. I am always happy to chat about my photography work. Once we’ve done an interview I would love to be able to post it on this blog!