Development of my Practice

From May 2020, thanks to the ACE Covid-19 Emergency Response Fund, I was enabled to combine my personal practice and passion for constructive images with my work in the Cultural Heritage sector. The three virtual 3D models above were made through a commission from the Burton Art Gallery, Bideford. They represent the pinnacle of my creative arts practice at present; a level adequate for simple decorated objects and comparable to those produced in major international museums. However, after being given the opportunity to dip my foot in the water, my aspirations are for far higher, I want to get fully submerged and learn to swim.

I’ve reached this point through 25 years of developing my practice detailed briefly below:

Since the mid 1990’s my photographic work has been made through construction of more than one frame. It started through the wish to record more of what I saw in front of me without being restricted to what was seen through the viewfinder only. I chose was to shoot 35mm film frames sequentially to include time passing and journey taken and then print the two, three, four or even five negatives together in a 5×7 inch enlarger. With some of these triptychs I had even explored walking around an object and viewing it from three sides.

The photographic process of making images has always been visible, through intention, in the finished print. These 35mm triptychs and larger were printed in a colour darkroom, in total darkness, with the inclusion of part of the film’s sprocket holes in the prints; there was also light spilling through the clear areas between and around the frames of negative image onto the photo paper. This inclusion became more important as film and the traditional silver-based photography was superseded by digital. Later in my journey, whilst digitising negatives from the 1970’s, I was able to interpret these imperfections for what they were, differentiating between the photographer’s intent and the inherent flaws in the medium.

I made the leap to digital in 2001 through this series ‘Proposed redevelopment of Northampton’ an exploration of how my hometown might look inspired by reading that ‘Northampton might have been Oxford or Cambridge if it hadn’t been for the students revolt and the great fire of 1675’. The work was made by importing shop fronts from Oxford, Cambridge and Bath into the current day town and duplicating some of Northamptons fine buildings. The work and accompanying text was exhibited in Northampton ‘s Roadmender Art Centre in the group show 4square. As a teacher I wanted to learn from the new digital medium and as a photographer I wanted to embrace it, find and use its unique qualities to further develop the medium and my practice.

From 2002 I used the same approach, equipment and software in the first photographs of my ‘American West’ series. The scale of the American west is so vast that I was forever disappointed with my photographic results. Using a small digital camera was no match for its vastness and subtlety of colour. My response was to look at the small pieces that make up the puzzle, the bedrock of the American wilderness, the parts unique to this landscape and absent from my experience of the UK and Europe. 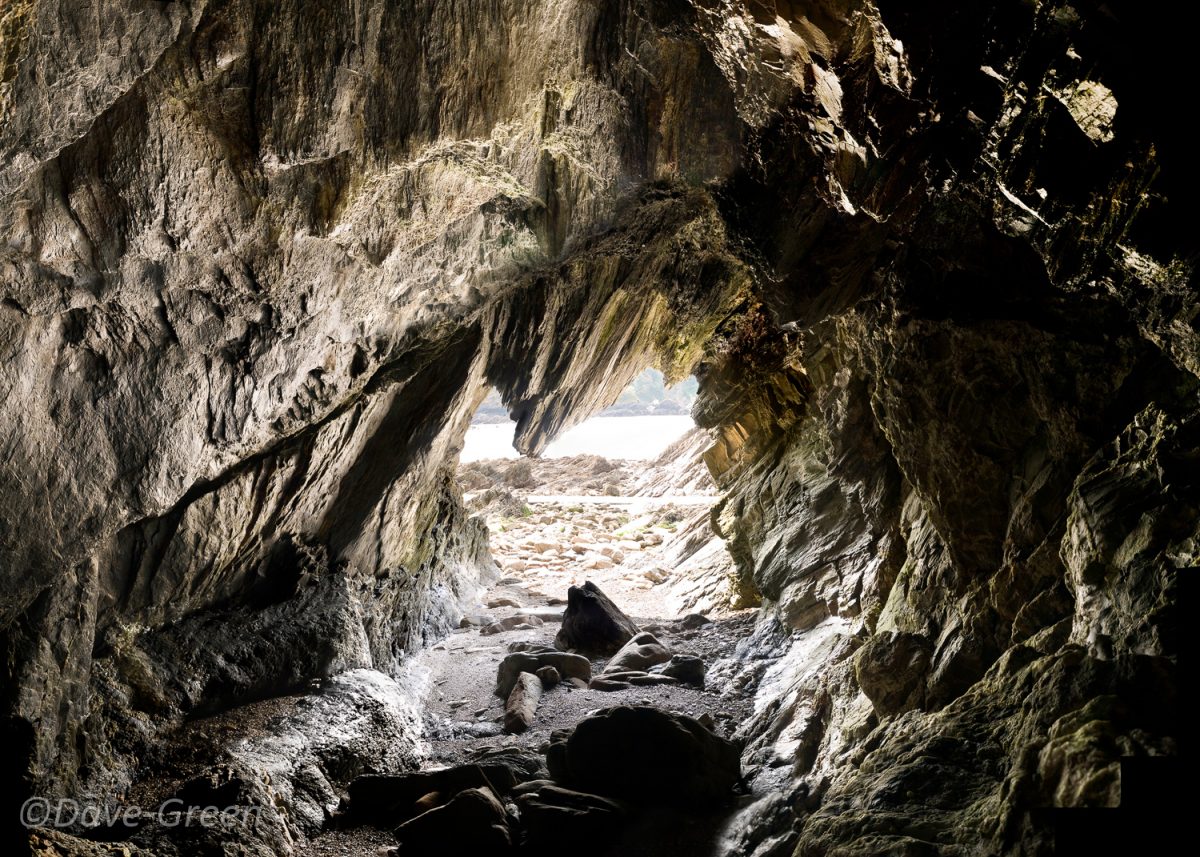 From 2005 to 2016 I embarked on a mammoth exploration of the North Devon coast, especially it’s Sea Caves. These constructed images, made initially from a paltry 25 frames, growing to over 200 as camera and software technology developed. This series won many plaudits with reviews in local newspapers, talks at camera clubs and having the images shown in regional galleries, including the Westward Ho! and Bideford Art Society where it was first ‘photographic’ work the Society has shown in its 91 years. The real highlight was exhibiting the work at the North Carolina Aquarium under the title ‘Great Britain’s Graveyard of the Atlantic’, owing to the coast of NC also being known as the Graveyard of the Atlantic. This exhibition and a sister show at the Landmark Theatre in Ilfracombe was supported by the North Devon AONB. Another welcome recognition for this series was a portfolio feature in the international journal Photography & Culture, volume 9, Issue 1, March 2016. 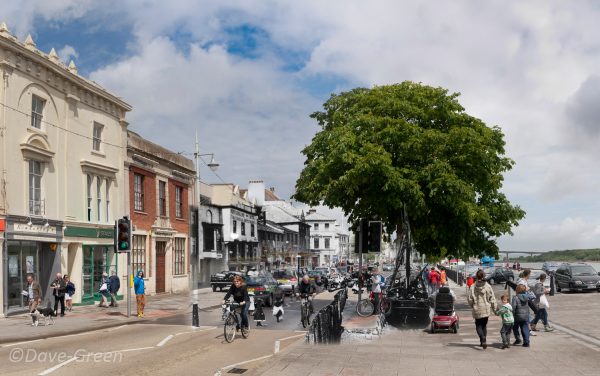 In July 2013 I received a commission for a new large-scale image for a new JD Wetherspoon pub, The Rose Salterne, on historic Bridgeland Street, Bideford. I was commissioned to make a new constructed photograph for the premises based on seeing my GhostCards, a combination of historic photographs and a constructed new image of the same place. This series of images, started in 2009 through a Beaford Arts commission, was the first time I had used historic images in my work, my first brush with the Cultural Heritage sector. The result of the commission, left, was a 2-metre-wide picture, based around a Victorian photograph from the Beaford Old Archive. The buildings of the historic photograph are little changed but the width of Bideford Quay is now approximately three times as wide. The new image was shot a few feet closer (because of a large road-sign) and was constructed from up to 347 frames, perhaps 200 of these were stitched together in the final photograph. The photographs were taken between 11am and 11.30am over two days; the first a showery Saturday when lots of people were in town, and the second a sunny mid-weekday which gave me a better sky and evenly exposed road and stone floor. 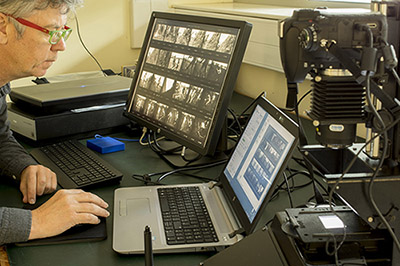 t the start of 2017 I started an 18-month freelance contract for Beaford Arts. My work was to digitise 10,000 35mm, black and white negatives, of James Ravilious and Roger Deakins. These dated from 1971 to 1989 and covered all aspects of life in rural North Devon. This was the first time I had really immersed myself in the Cultural Heritage sector top loading my workload initially with 3 long days at the Devon Heritage Centre in Exeter, where the negatives were kept in a climate controlled, fireproof, strong room. These negatives had never been printed by the photographers and it was an honour to interpret them in keeping with the creators’ style, whilst working within the confines of the brief. Ravilious’ rich tonal range contrasting to Deakins stark, high contrast grainy images with heavily cinematic atmosphere. My experience here is detailed in my blog starting here. I was also able to share it in a paper I delivered to the Association for Historical and Fine Art Photography (AHFAP) conference in 2018 at the British Library. In 2019 many of my digitised interpretations were exhibited in a tour starting at the Burton, Bideford under the title HERE | Uncovering North Devon. I was honored to be credited for my digitisation and enhancing skills for each of the images on display!

From 2018 – 2020 I was working on a freelance contract for Art UK, photographing sculpture in throughout the South West. I was one of the 50 odd photographers making a photographic record of the 170,000 sculptures, held in British public collections. Under tight time constraints my intention with each sculpture was to imagine it through the eyes of its maker portraying this through lighting and composition. 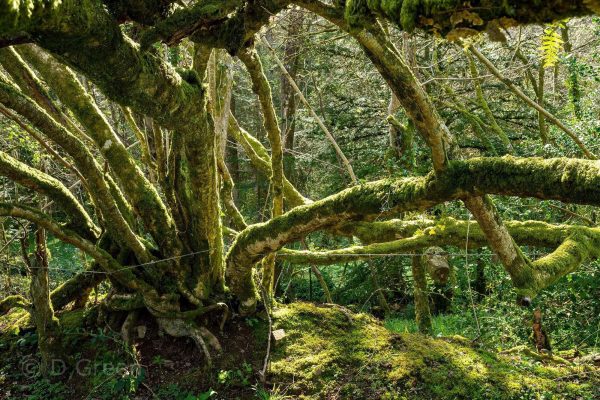 In July 2019 “The category prize for Changing Forests was awarded to David Green for Old Hedge, Venton Wood, Devon, an image that is warm, soft and saturated with green, ‘the colour and feel of North Devon’ says Green. Depicting a boundary hedge at the edge of a field, one which has struggled free of the barbed wire fence that imprisoned it, Green’s photograph captures the resilience and quiet adaptability of nature, offering a different perspective on the battle between humanity and the environment.” from EarthPhoto website

This was recognition for my personal explorative landscape-based arts practice, ‘Green and Pleasant Land’ a series of photographs I had started in the summer of 2017 in direct response and in reaction to the work of James Ravilious.