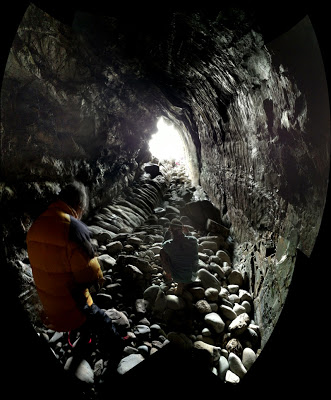 Sea caves, shipwrecks and the rocky shore starting at Roses cafe, Crooklets beach, Bude. I’ve run this workshop at Sandymouth a couple of times in the past but have always started from the cafe there; this time as it’s winter I started in Bude. Roses cafe is an ideal starting place, opening at 10 AM and surving good coffee. Sue and Rob, taking part in the workshop, both had plenty of questions and open minds with very different needs. One had a DSL, the other a compact camera. Both had adventurous spirits and a love of the outdoors and of the coast.?

After what seems like a year of rain and a mild Christmas today was a gloriously bright sunny Sunday. We trecked north along the beach from Bude towards Northcott mouth. Studying the geology of the magnificent cliffs, with contorted rocks, with artists eyes. I introduced them to scenes with high contrast deep shadows and bright highlights. The human eyes and brain can see detail in all of these places but the camera has a limit to what it can record. I demonstrated this limit, but in a positive way, by allowing some shadow areas to go very dark or black lacking detail, but drawing attention to well lit areas within a composition. We continued to photograph what the sea had revealed on the beach as we walked north. Spending a little of our time photographing a small natural rock arch over rock pool. 1 mile north of Bude is what’s left of the Belem. This 2000 ton steamer was wrecked in dense fog in 1917. Various parts including the boiler and firebox are still visible.?

Meninchurch point lies just on the cliff side of this wreck and in this headland is a great cave which was our journey’s goal. We made our way through the great boulders at this cave’s entrance and scrambled up to the back rock wall.The cave looked splendid, full of wonderful forms including what are clearly the ripples of an old beach seen in the vertical rock face on one side of us. However, it did not look at its best as it was very dry inside, the tide having left three hours previously which made the interior quite dull, flat and grey. But it was a good place as a teaching exercise, shooting into the light and having to prevent flair from flattening the shadow areas of the interior. Our presence in the cave, attracted a family with young children and dog to come exploring too. I’d like to think our being there had encouraged a family to come exploring where without us they may not have had the confidence. The photograph on the left long and thin, was made using the iPhone is panoramic mode. The photograph at the top was made using the auto stitch app. After the photo shoot we went back to the cafe downloaded images and I demonstrated some enhancements in photo shop. These included processing a raw image using photoshops software, combining images together, cropping, and generally making the images look there best with very subtle alteration.

?Looking back over the day, it is often the unexpected things that participants gain the most from: Sue now has a ‘working’ tripod and Rob can confidently used his camera in the manual mode.

“Thanks for a really interesting and instructive day! Thank you again, the day has made me realise where my interest really lies and has prevented me spending money on things I can do without!” – Sue Lane