Some text to accompany my work which is the first ‘photographic’ work the Society has show in it’s 91 years: 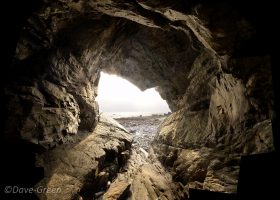 I was interested in finding historical and literal context for some of the landscape I was experiencing, and went in search of a cave Charles Kingsley had written about as a sheltering place for Rose Salterne, his startled naked maiden in the novel Westward Ho!

“In only one of these mouths is a landing for boats, made possible by a long sea-wall of rock, which protects it from the rollers of the Atlantic; and that mouth is Marsland, the abode of the White Witch, Lucy Passmore, You be safe enough here to-night, miss. My old man is snoring sound abed, and there’s no other soul ever sets foot here o’ nights, except it be the mermaids now and then. There’s the looking-glass; now go, and dip your head three times, and mind you don’t look to land or sea before you’ve said the words, and looked upon the glass. Now, be quick, it’s just upon midnight.”

“Rose went faltering down the strip of sand, some twenty yards farther, and there slipping off her clothes, stood shivering and trembling for a moment before she entered the sea. She was between two walls of rock: that on her left hand, some twenty feet high, hid her in deepest shade; that on her right, though much lower, took the whole blaze of the midnight moon. Great festoons of live and purple sea-weed hung from it, shading dark cracks and crevices, fit haunts for all the goblins of the sea.”

A cave was found but hardly big enough to find refuge and certainly wouldn’t hide your parts from the rest of the beach; was there another cave? Kingsley’s book was written over 150 years ago and it was set in Elizabethan times. Much can change at the edge of the land in just one year, let alone 150 or 400. My guess is that there would have been a far greater cave at Marsland Mouth in Kingsley’s day and the small, shallow cave wasn’t it. However one work of fiction can lead to another and I went about photographing the cave I had found but thought about the cave in his novel. 31 frames were shot for the construction of Maiden’s Retreat at 5.07pm over 7 minutes. Rather than using a long lens to prevent distortion and make my images as truthful as possible, as I would normally do, I used a wide-angle lens to distort the perspective and make the cave seem deeper. I was keen to highlight the heart shape of the aperture opening to illustrate the ‘love story’.

The frames were later stitched together in Photoshop. 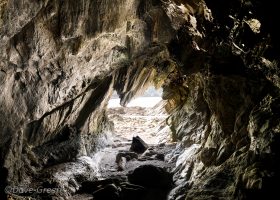 Mining for silver, lead, copper, zinc, manganese and limestone has been done at Combe Martin since 1293. This place would have started as a cave, later it would have been mined, but now and for at least the last 100 years it has reverted back to being a cave. Combe Martin Bay is riddled with caves into the steep cliffs and the miners would have had to transport all of their tools and ladders across the rocky shore, in all weathers, every day at low water to work the mines. Then before they were cut off by the incoming tide, take their tools and any of the metals or stone mined back with them to the village.

This image was made to look as truthful as possible, an accurate record of the experience and memory of being in this cave, exploring all of it’s nooks and crannies. 50 frames were shot and later stitched together to make this image. My images can often made up of more than 100 separate photographs, of different exposure, angle of view and framing, all from a fixed point to give the detail from the deepest blacks to the brightest highlights in this extremely high contrast scene. Photoshop is the computer programme of choice for the stitching of images together. This process can take many days to complete because the file size and processing power needed pushes the limits of today’s computer capabilities; but it is not unknown for me to rework an image a year or more later as software, processing power and RAM are updated.

Both constructed photographs are printed on archival paper, mounted on aluminium and protected by acrylic glass.