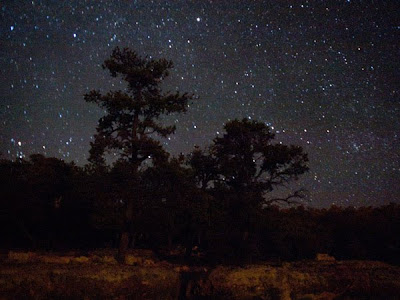 I’ve been over in Tucson AZ seeing friends, enjoying a holiday and playing with a new camera. I got an Olympus Pen EP1, so that I can keep a small camera with me all the time which should be good enough to take a professional picture. We’ll see! It performed extremely well under the hot desert sun. The pictures here are, in some respects, examples of where it isn’t comparable to the E3, however let the camera talk finish there.
These are both night photographs from the rim of the Grand Canyon on a moonless night. What a fantastic sight, it’s really unbelievable just how many stars there are. I’m used to seeing stars in North Devon where light pollution is minimal, but here at the GC, 7,500 feet higher, you feel you can touch them. I remember feeling disappointed that I wasn’t going to see a full moon whilst in the USA, but no moon, in some respects, is better.
The light on the canyon wall in the photo below comes from dimly lit Bright Angel lodge, a mile away. I was also amazed at how much a little light can make in such a dark place. Even my small, LED torch (flashlight), could make a huge difference. One would have thought a place as wild and pristine as the Grand Canyon could restrict their lights to the floor and the inside of buildings rather than lighting places miles away. I guess light waves are much like sound waves; you shout to someone across a room 30ft away, but when you shout on the rim of the Grand Canyon those waves travel 12 miles and reflect of the North Rim wall and travel 12 miles back again as an echo less than a second later.
I’m reliably corrected by Paul Madgett, thanks Paul: “sound travels at around 1100ft/sec at sea-level (though a little slower at higher altitudes) – ie roughly 5 seconds for a mile – thus any echo from a shout across the full 12-mile width of the Canyon would take about 2 minutes – if you were hearing an echo in less than a second, this must have been from nearby canyon walls on your side of the Canyon. Light, on the other hand, at about 300,000km/sec would take less than 1/10000 sec to “echo”. 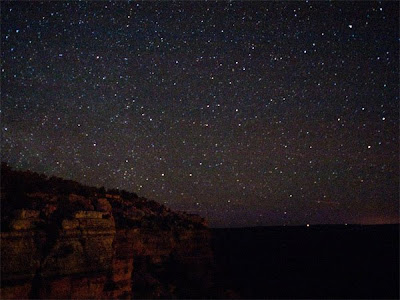 On the wall at the RWA

Great photos! What was the exposure time? Did you stack multiple images? Did you subtract a dark frame? Any filters? Sorry for the barrage of questions, but the photos are amazing, and I'm curious.

Hi Tony, thanks for your comment. In answer to the questions; exposure time was only 30 seconds as that was the limit on the Olympus EP1 unless you have a cable release for 'bulb' which I didn't, because of this relatively short time I increased the iso to 400 for a better exposure. Each photo is one image, no filters and I'm afraid I don't no what subtracting a dark frame is so no I didn't do that. Take a look at http://green-gallery.blogspot.com/2011/01/turning-night-into-day.html and further back in my blog for more night photos with my 'proper' camera and cable release. But nothing beats the Grand Canyon stars.