“I hit the jackpot in London today at the British library!” was how I started an email to my client on my train journey home from a research trip to London on 12th November 2019.

“After spending some time researching through the microfilm I have found, at last, the actual newspaper that all of your washers came from! Every single one of them comes from the Daily Telegraph dated 7th February 1861 pages 7 and 8. All I could do today was to download PDFs of the microfilm copies, so I don’t think they’re as good even as the British newspaper archive website (where they are missing) – although the librarians were adamant that the quality was as good!”

“I had requested the physical copies of the newspaper, hoping that it might deliver our goal, however, even though by email I was assured that the actual newspaper would be available it did not materialise and I was told that their policy is to only allow research of the original newspapers when another source, like microfilm isn’t available. I’m confident now, as I have identified literally one page – front and back – that I will be able to convince The British library to allow me make a high resolution copy with the camera, even if that means making many photographs of the newspaper page and stitching them together.”

“….everything comes from essentially one page, I shall look again at making something creative because I never believed that I would simply be dealing with a single page, numbered 7 and 8 of a newspaper. This will open up many more possibilities of interpreting the work….” 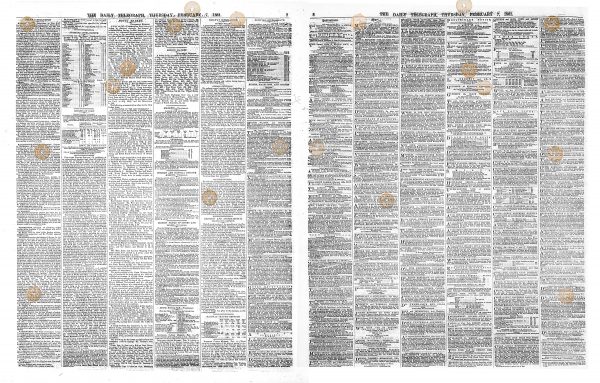 A few days later I made a mock-up of the newspaper washers in situ using an enhanced, PDF from the microfilm as a base. It was suggested that the final product could actually be laying the washers we have on top of a fine print of the newspaper.

However, I felt that to fix them on top of the actual newspaper, or copy of, would require some physical attachment, like glue, and that would make their positioning very permanent, like the three that are already stuck down and prevent one from seeing the reverse. I had considered some kind of panel so that both page 7 and eight could be seen through turning the panel over but it was seeming too complicated to hang on the wall. In theory, if only one page was necessary to be seen then the actual washers could be fixed down and perhaps held under some kind of acrylic to seal the whole thing in and enable viewing.

But another problem with using the actual washers is that it would dictate that the newspaper is made to its actual size. This would obviously be fine to read at arm’s-length, in an easy chair; but if it’s hung on the wall and viewed from any distance then it needs to be printed a lot bigger because the text, the story that gives the washers context, it’s so important it needs to be read.

Another problem of course with having the actual washers on top of the newspaper is that the Czerny washer is page 8 where as most of the good stories are page 7.

I came to my senses by 19th November, put on my museum hat and emailed:

“I think the safest place for your washers, to be quite honest from a heritage/archival point of view, would be to keep them in the dark. They have been held flat, under pressure, in the dark for 160 years; I believe that if they are left out for any length of time in daylight they will fade, just like all newspapers and books fade in time when exposed to light.”

“I started to move your washers from the old 35mm slide display pages to some new ones which are designed for antique coins but they have little flaps over the pockets which prevents the washers from moving or falling out. I think that if you have some artwork on the wall which includes photographs of the washers and the newspaper pages that they come from with the stories to give the whole thing context then you can refer people who are interested to the museum box on your shelf which holds all of the actual washers and the small stuck down display card of washers and other bits and pieces found by the restorer. The museum box file could also include additional research of the washers and a copy of the pianos restoration blog.”

In the meantime I started the process of obtaining high quality images of the Daily Telegraph, dated 7th February 1861 pages 7 and 8. The British Library’s service was very good as I received the files by transfer link in an email on 5th December 2019. The Tiff files were encouragingly large at 450mb each. The mock-up below was made using the new files.

I had been concerned about copyright issues that might come out of using the 1861 newspaper pages in new Artwork. However, I had a reassuring email from the British Library saying:

“If you found and downloaded the image from British Newspaper Archive, you are free to use the copy, the fees have been waived. Please credit the Library as the original source.”

“……… beautiful empty landscape space in my music room. It is about 46 x 83 inches. Could we enlarge the double photo to cover this spot like wallpaper?  What do you think?”

We talked up some ideas about making a spread of the newspaper pages and printing large like wallpaper onto the wall. My only reservation was that:

“it is only wallpaper and you will not get photographic print quality from it. Having said that, it might perhaps be more in keeping with the quality of a newspaper which would be quite appropriate.” 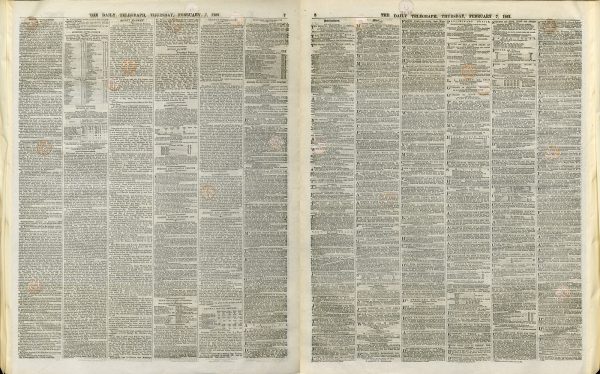 I WeTransferred a high quality mock-up of the newspaper pages with the washers in place.

“This would print, high quality, as big of 6 foot wide. That’s probably way too big unless you live in an aircraft hanger, but at least we don’t need to worry now about quality of text for reading it easily. The image of the newspaper is just as I received it, I haven’t altered the colour or contrast here and I can only assume that it is a more or less accurate reproduction of how it looks right now. Your washers have yellowed with age and are grubbier through use but I want to work on my reproductions to make them less yellow and less magenta in the highlights.”

“…. I’m very much leaning towards some large reproductions of your washers which show off their translucency, textural and fibrous quality of the old newspaper medium. Alongside these standalone images of the key washers would be this double page printed at least full ‘broadsheet’ size approximately 30“ x 24“ – twice the size would make it easier to read if it’s hung on a wall.”

“An alternative to this that I have been thinking about would be to literally make the 1861 newspaper page seem like it is just that – a single sheet of paper approximately 15” x 24” with page 7 and your washers printed on one side with page 8 plus washers printed on the reverse. There could be many duplicate copies of this, and it could be printed quite low-grade so it was more like a newspaper, and then people looking at the framed artwork could literally sit in the chair and read a newspaper page which looked and felt like one. It could even be printed to fit the size of an American broadsheet Sunday paper that you might subscribe to?”