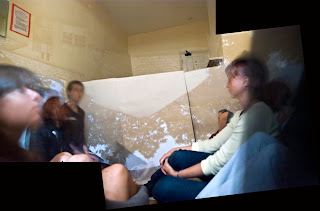 I?ve just come to the end of two weeks of workshops for myself ?greengallery?, Beaford Arts, the Plough Arts Centre and BBC Blast. It?s funny how it all comes at once; but good that I now have a week dedicated to only the Bideford Folk Festival.

Everyone seemed extremely happy with all they achieved through the workshops, and organisers too, with many sessions being over subscribed; photography seems to getting very popular!

The workshops have covered the whole spectrum of photographic genre and it?s whole history (and pre-history): chronologically I started with the pin-hole camera, at Beaford Arts with a ?gifted and talented? summer school residential designed for school children. The technology of seeing an inverted image on the wall of a darkened room through light entering a tiny hole was known over 2000 years ago and noted by Aristotle. Being inside the room and gradually seeing the image of the outside world reveal itself on the walls, as our eyes adjusted to the lack of light, was a great thrill; repeated again with adults two days later with just as much excitement. 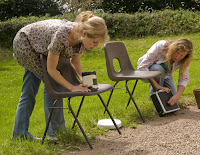 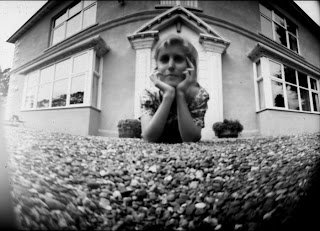 tins. This is an incredible process as the raw material is simply a box or tin, made light tight through the liberal use of black tape, made non-reflective inside using black paper or card and having a lens (hole) made with a pin prick in a piece of silver foil which is then taped over a larger hole somewhere on the box. Exposures are made through the pinhole onto black and white photo paper, held in the box with masking tape. Another square of black tape serves as a shutter. That?s all there is to it and this image was made after about 5 hours of the workshop. The image above was made by ‘soon to be teacher’ Natacha Withoft.

Images without a camera follows with the making of photograms or as Man Ray coined in the 1920?s ?Ray-o-graphs?, the placing of objects on photographic paper, exposing them to light in a darkroom, then developing and fixing the image ? this process goes back to the very early days of photography 1840?s when Fox Talbot and others made similar images on light sensitive paper. Daylight prints or chemograms were also made, a similar process but with no darkroom, and giving wonderful warm browns, pinks, purple and yellow colours, with occasional greens where the paper was fixed (slightly) first and silver where a build up of the metal occurred on the paper.

To carry on in a chronological order I could give you two examples of long exposures which relate to the length of time one might have had to expose film or plates in the 19th century. 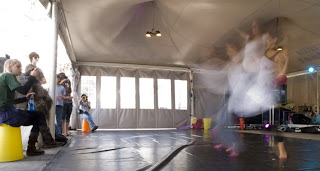 One of my workshop titles for BBC Blast was ?Action Photography?, and one of my methods for recording action/movement was to slow it down and sometimes use flash to freeze it within the same image; this image shows my Blast students photographing a dance practice with as slow shutter speeds as they could use. The process was taken to a greater extreme at the Beaford residential where, after everyone feeling really tired by 8pm we took stock for an hour then carried on outside to experience night photography. 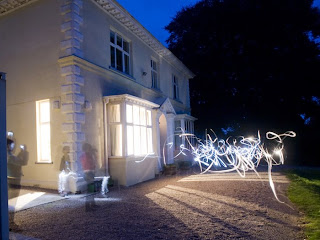 Give a few young teenagers torches and you need to do little directing to make some great images. Everyone got fantastic pictures, even those who had no control over shutter speed managed to make images by combining layers of light rings together. This image of the Beaford Centre and students was a 1 minute exposure using a tripod to steady the camera. 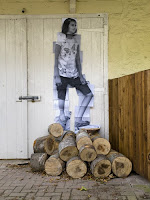 Another successful project during the residential was making a joiner similar to David Hockney?s images made in the 1980?s. Students were encouraged to photograph each other in situ around the building; making many images which were then printed out and joined together to make life-sized images. This one, slightly bigger than life, will be made permanent through wallpaper pasting the images onto the door then sealing it with yacht varnish.

Coming right up-to-date all of the BBC Blast workshops, the Plough Arts Centre and most of the Beaford residential were based around getting more out of digital cameras. Time was spent on all of these understanding the basics; aperture, shutter speed, focal length, ISO, exposure etc; setting the cameras up for optimum image quality and making more interesting and engaging images for any given subject. Using the past as inspiration to visualise the future. 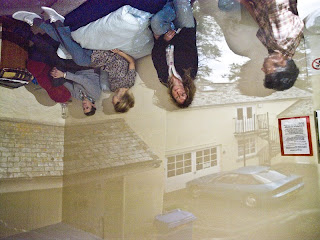 Experiencing life inside a camera, a converted bedroom at Beaford Arts.