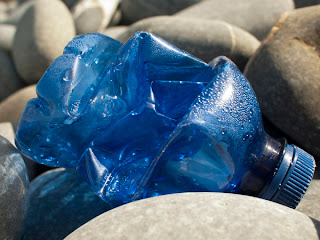 I?m sometimes blinded into thinking that our beaches are relatively clean. The places I go are exposed to such a punishing surf that little detritus is left. Sometimes there?s a fishing float, tyre or rusting side of a ship lodged permanently into the back wall of a cave but the rocky shoreline can appear scoured clean with every tide. Westward Ho!, my local sandy beach also fools you into thinking that litter is a thing of the past. That is until you see it at the end of a summers day after the holidaymakers have gone. On-shore-drift makes a fine job of moving the crisp packets, beer cans, and discarded beach toys down to Saunton Sands and the fortnightly spring high tide makes a good job of finding the neatly hidden plastic bags and polystyrene cups pushed into holes on the pebble ridge or held under a stone. We?ve learnt to recycle so well now that we even crush up the water containers so they take up less space. I?ve even heard visitors ask why there are no bins on the beach having no comprehension that at high tide there is no beach; but this doesn?t stop piles of rubbish being neatly stacked together as if to say ?We believe this would make a good place for a bin!? 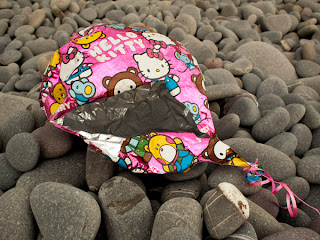 How difficult is it “take your rubbish home with you”? Another question would be “Is anyone ever prosecuted for dropping litter?? I?m sure we could find a few cases but how about ?Has anyone ever been prosecuted for letting a helium balloon fly off, or a lantern for that matter?? I will end up on a beach eventually. 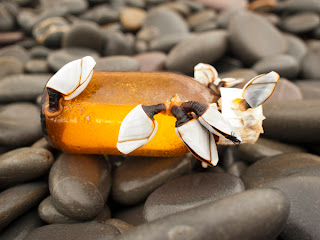 At least this cream bottle served a purpose as a useful floating home. I threw it back into the sea so hopefully these goose barnacles survived!