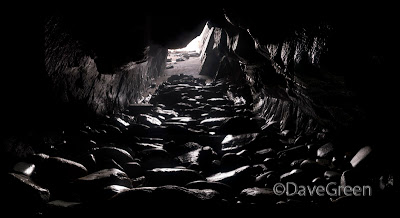 Baggy Point, the headland on the east of Croyde in derives its name from bag, meaning hole or cave. The headland is full of caves, and February?s extremely low spring tide lured me to explore Baggy Hole. Kester Web, knows this coast better than most, and encouraged me along with Mark (brother of one of Kester?s old friends) and Matt, who we found climbing down a rope to the rocky beach. The photograph of Baggy Hole, above, was made from 75 separate frames, then stitched together in Photoshop. 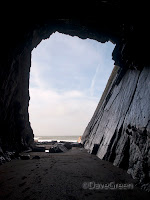 The image above is the quick sketch and is very much work-in-progress but it shows how heavy threatening and foreboding the place is. It’s no wonder that there have been tales of ship wreck, smuggling, mermaids and secret passageways associated with Baggy Hole. Eventually after a few days at the computer I’ll have an image that can be printed high quality 150cm wide. I like to get a sketch made soon after taking the original photos so that I know I have the whole image and because I never quite know how it’s going to look. Often I’ll only get this far deciding that compositionally or aesthetically it just isn’t working. 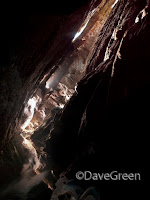 On the left is the secret lake made from exposures of up to 6 minutes long. This is a treacherous coast and accessing these hidden places can only be done in the right weather conditions and on the lowest of tides. Also a little rock climbing knowhow, a rope, harness, carabiners and sling are important for safety. You wouldn?t want to be stuck in these places with the tide racing in.

Baggy Hole is the largest of the sea caves in Baggy Point. This was our first destination and involved a slippery descent down a little used fisherman?s track to the beach, a scramble over wet boulders; then a climb up, over and down a ?camelback? of rock to another beach, the entrance to the cave. The cave, unseen from the cliff path, is huge it?s entrance must be 50ft or higher and the distance from front to back must be 100ft + but I?ll get these confirmed and update once I know. I just wanted to get as far into the cave as possible and see the full extent of the cave from it?s dark depths. 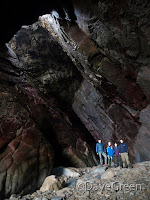 There?s little point in trying to explain how to get to Secret Cave, I?ve been there before and I still couldn?t find the narrow entrance that you slide down feet first, even though I?d been led to within a couple of feet of it. This place is truly special, everything you might want of a cave, lot?s of passages, a huge skylight, opening to the sea with small beach, and a large lake-like rock pool. You might want to live here if it didn?t fill with 30 feet of water twice a day. This image shows the scale of with the skylight top left.