A new JD Wetherspoon pub, The Rose Salterne, opens it’s doors on Tuesday 23rd July on historic Bridgeland Street. I was commissioned to make a new constructed photograph for the premises based on my ‘Ghostcard’ series of images. Above is the finished, 2 metre wide picture, based around a Victorian photograph from the Beaford Old Archive. The buildings of the historic photograph are little changed but the width of Bideford Quay is now approximately three times as wide.

The original image, above, would have been photographed from the Bideford Long Bridge, I think the darkened edge of the bottom right hand corner could be part of the bridge. Unfortunately to have followed suit and photographed from exactly the same place I would have most of the image obscured by road signs. The new image was shot a few feet closer and was constructed from up to 347 frames, perhaps 200 of these were stitched together in the final photograph. The photographs were taken between 11am and 11.30am over two days; the first a showery Saturday when lots of people were in town, and the second a sunny mid-week day which gave me a better sky and evenly exposed road and stone floor. 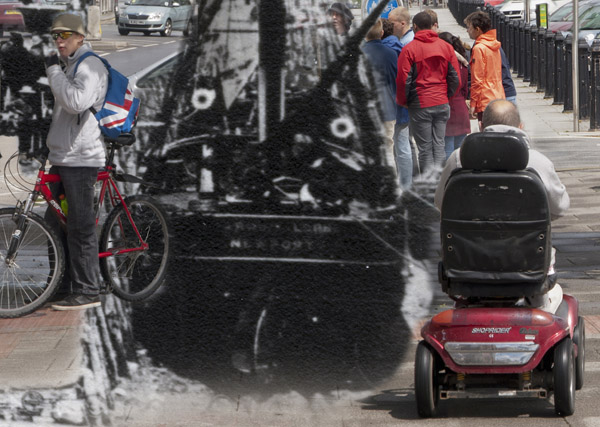 In this close-up you can see where the edge of Bideford Quay used to be as the cycle hangs precariously over the edge.

In my Ghostcard images my intention is to form a relationship between the present and the past. In the close-up above, the present day man driving a disability scooter seems to veer to the right to avoid the Victorian ship. Cars and cyclists drive and ride around the girls dancing on the original quay. In the close-up below Andrew Powell, local historian dressed in Elizabethan costume, addresses a group of Mark Horton’s archaeology students from Bristol University; he appears to be telling them all about this ancient ship. 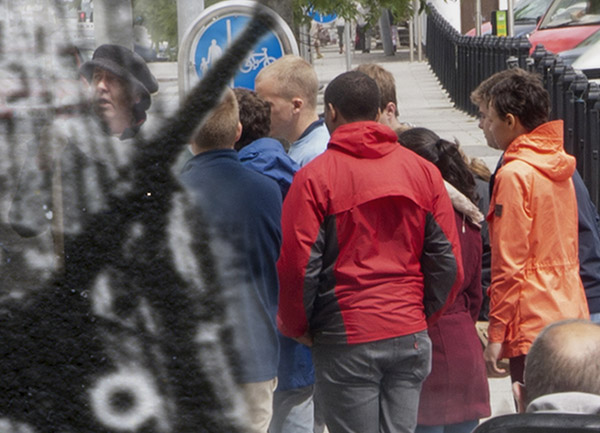 Andrew Powell, author of Grenville and the Lost Colony