I?ve just had 2 very busy days teaching, but what joy it is simply being physically tired rather than mentally drained.

This was a two-day residential at Beaford Arts Centre, teaching 12-14 year olds photography. It?s part of a programme that Beaford puts on for ?gifted and talented? pupils. Caroline Preston, who runs the Beaford Education Programme, and I led the course. 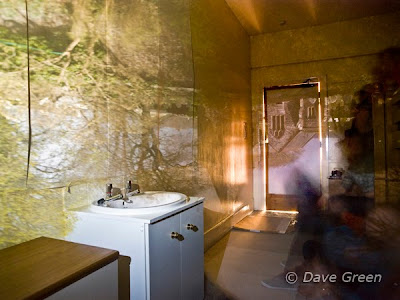 We started with a group exercise matching digital camera terms with symbols; this was a way of breaking the ice as the ten children were from all over Devon, some of them knowing no one else on the course. They did surprisingly well with only one matching pair the wrong way around. We use these symbols all of the time and quickly get used to what they do or represent but forget what they stand for.

Next we all converted one of the bedrooms into a giant pinhole camera. Three of the pupils blacked out the windows as I spent some time with individuals and their cameras making sure the set-up was optimised for biggest size and best quality and, looking towards the evening?s exercise, whether they were able to make a long exposure of 1 second or longer. With a large square hole, approx 4cm across we could see a very out-of-focus image on the wall. Caroline had a great idea to tape sheets of drawing paper onto the walls. I then demonstrated how an aperture works by gradually making the large hole smaller and smaller; the image on the walls became darker but also more in focus. As our eyes adjusted to the dark, after about 5 minutes, we were able to see the outside world, up-side-down, on the walls, floor and ceiling of the bedroom. The children found interesting parts and started to draw what they saw onto the paper using charcoal sticks. It was impossible to ?see? what you had drawn so there was a certain amount of faith involved in believing the image would be there once the light was turned on. I talked camera obscura, Aristotle (who wrote about this phenomenon 2,500+ years ago) and related it as best I could to its use to artists prior to the invention of photography. I also took a whole lot of 1 minute long exposures capturing the image and blurred artists in colour ? the image to those inside the ?camera? looked black and white because the ?rods? were being used in our eyes instead of the ?cones?.

When the light was turned on I was astonished at the masterpiece that had appeared on the walls; an up-side-down sketch of the church, trees and walls that made up the external view, were all there seamlessly drawn on the paper taped to the walls. 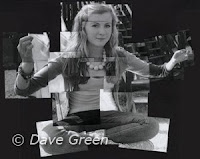 We had been given the opportunity to paste life-sized ?joiner? images onto a stark metal container that sat outside at the back of Greenwarren House (which houses Beaford Arts). This is related to the constructed images I do myself through, amongst other themes, the cave images of the North Devon Coast. I started teaching the making of full-sized joiners of people when I was working in a school on Tucson AZ where the only technology I could rely on was a black and white printer and some small digital cameras. The pupils split into groups of 3 or 4 and came up with ideas of how they, individually, would like to be seen on the container?s walls. Some wanted to play with scale and perspective, one fancied the idea of levitation and others thought of hanging from the roof or doing a handstand against the side. I gave some technical and artistic advice to help make the images work and they were off creating their art.

The photographs taken were quickly downloaded and printed out as contact sheets so that small joiner images could be made as a template to see if the life-sized one would work. At least half of the children retook their photographs after this stage, some of them making a number of sets to make sure one of them would be to their liking. Once finalised these were printed off on a black & white printer each photograph being a full A4 page in size. The white edges were trimmed and quite some time was spent joining the separate pages together with masking tape. 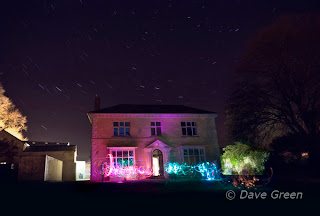 Once it was dark, the evening of the first day was dedicated to ?painting with light?. We started off indoors, in a controlled space where everyone could try photographing the same lighting technique, like hooping a coloured torch around on a string or drawing around a body, giving someone wings etc. the children soon got the hang of it and were leaving their cameras on self timer and making various light patterns and shapes all at once. We then went outside, Caroline and I had a few ideas for images but they were hardly needed as the group of pupils came up with idea after idea and were allowed to run with them. Around 10.30pm we lit the blackened interior rooms of the house with various swirling colours and photographed it from the garden; after this we set about writing ?Beaford Arts? as we just had enough participants for the letters. This image is a combination of both ideas exposed for 1 minute each and combined in Photoshop. We got back indoors at 11pm and wound down to 11.30pm doing a little editing and enhancing of the images produced. 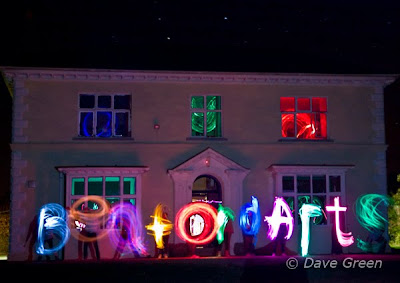 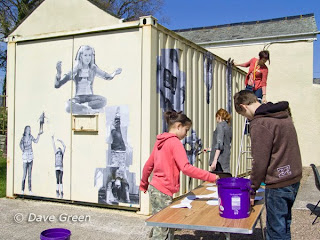 The morning of day two was spent finishing off the joiners then using wallpaper paste to fix them to the container. This process was very forgiving as many an artwork fell apart at the last minute to be rescued with glue on the wall of the container. The collective result was awesome and hopefully, after the joiners are varnished, will last for at least the rest of the year.

For the rest of the day the ten children were split into two groups. One learned about traditional photography, made famous at Beaford by James Ravilious, through making photograms in the temporary darkroom. The other group enhanced and edited their night photographs and learned various digital imaging techniques. They then swapped.

Parents arrived at 4pm and were treated to a tour of the inside of the pinhole camera with charcoal sketches, slideshows of images on the children?s laptops, drying photograms, two exhibitions, one of James Ravilious? work and one of my work, and the container outside full of joiners of the children.