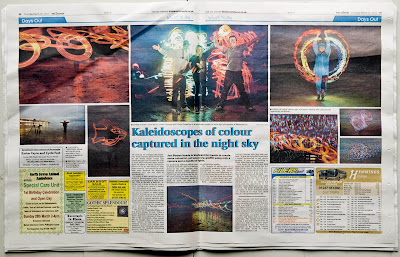 ?All publicity is good publicity? has a nice reassuring ring to it but I?m always a little nervous and excited when the press are interested in what I?m doing. Rosanna Rothery and her photographer partner Jon Bowen joined me with others at the end of last month for a ?Playing with Light? workshop. I was expecting the journalist to sit quietly in a corner observing and making notes and leaving after she had enough for her story. I was so wrong! Rosanna was an active participant in the workshop on a cold dank winter?s night on Westward Ho! Beach. You?ll see her in the Journal?s feature top right with angel wings. This particular image was made using 3 pairs of torch swinging hands, Sadie and Janis stand directly behind Rosanna, and a flash was used to freeze and correctly expose her against the night sky.

The main picture features three teenagers who had come down to the beach to see what was going on, attracted by the bright lights. They were very enthusiastic to get involved and this image of 30 seconds had a few of us scribbling with torches behind their backs, giving them saintly halos and adding a little white light on their faces so that we can see who they are. The Superman poses were chosen by themselves.

Here?s a link to the full article from the North Devon Journal 25th March 2010: www.thisisnorthdevon.co.uk/news/Learn-paint-light/article-1937602-detail/article.html

Last of the Dark Nights